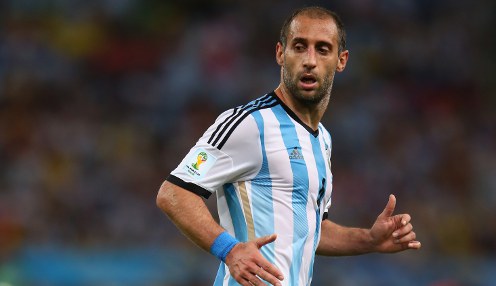 Pablo Zabaleta insists the players and not boss Manuel Pellegrini should take the blame for Manchester City’s disappointing season.

The Argentina international defender has leapt to the defence of Pellegrini, who he says deserves more respect for what he has achieved since he arrived at the Etihad Stadium less than two years ago.

City won the Premier League and the Capital One Cup in the Chilean’s first season at the helm, but they have failed to mount a serious defence of their league title this season and suffered more disappointment in the Champions League.

When you don’t win titles it can be a little bit frustrating for everyone.

“We must be honest with ourselves and recognise that it was not our best season but sometimes football is like that,” said Zabaleta.

“Now it seems like because we have not won something it’s a disaster and we have to change seven or eight players and the manager – that’s what people say.

“The manager deserves more respect from everyone. He came last season, he won the League and the Capital One. We cannot blame just the manager for this moment.

“Individual players have not been great in the whole season. Everyone is responsible – when you don’t win titles it can be a little bit frustrating for everyone.”