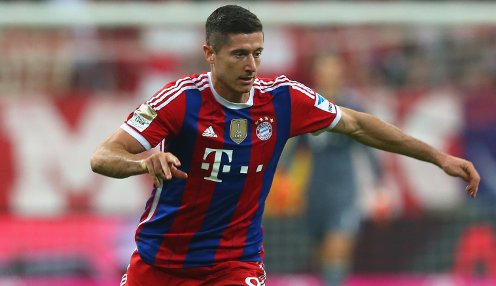 Robert Lewandowski is one of two injury blows for Bayern Munich.

Bayern Munich have suffered two massive injury blows ahead of the first leg of their Champions League semi-final against Barcelona next week.

Dutch winger Arjen Robben has been ruled out for the remainder of the season after tearing the calf muscle in his left leg a matter of minutes after coming on as a substitute in the DFB-Pokal semi-final loss to Borussia Dortmund.

Robben had been sidelined for just over a month by an abdominal muscle problem and his latest setback means that he will not feature again until next season.

Meanwhile, Bayern are also set to be without in-form striker Robert Lewandowski for some time after he suffered a broken nose and jaw and concussion in a collision with Dortmund goalkeeper Mitch Langerak.

The Poland frontman has been in fine form in recent weeks, scoring nine times in his last 11 matches in all competitions for Bayern, but his participation against Barca next Wednesday is in serious doubt.

However, Lewandowski has not given up hope of being able to face Barca, as he tweeted: “Its a few more days till the match at Camp Nou, I really hope I will be able to play!”

There was some better news for Bayern from their German Cup exit, with the knock to former Barca midfielder Thiago Alcantara described as just bruising, meaning that he should be ready to face his former club next week.

Bayern can be backed at 2.10 to reach the Champions League final, with Barcelona 1.72, while the Bundesliga giants are 3.50 to go on and lift the trophy.