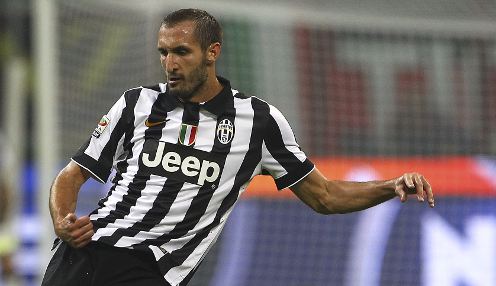 Juventus have suffered a massive injury blow ahead of their Champions League final against Barcelona, with Giorgio Chiellini having been ruled out by a calf injury.

The rugged 30-year-old Italy international had been expected to be a key figure in the Bianconeri backline in Berlin on Saturday evening, but Chiellini suffered a problem in training on Wednesday and subsequent scans have confirmed the bad news.

“The tests showed a first-degree lesion of the soleus muscle in his left leg, so the defender will not be available for the match against Barcelona.”

Juve already have a lack of cover at the back, with Martin Caceres’ season having been ended in early March by a fracture to his left ankle which required surgery.

Meanwhile, veteran Andrea Barzagli is a major doubt as he bids to overcome a slight tear to the muscle in his right thigh.

That leaves Angelo Ogbonna as the most likely candidate to replace the stricken Chiellini and play alongside Leonardo Bonucci in Berlin on Saturday evening.

Up front Spanish striker Alvaro Morata has the opportunity to join a select band of players who have won the Champions League in consecutive seasons with different clubs.

Having been part of the successful Real Madrid side 12 months ago, Morata has helped Juve to the final this season and will equal the achievements of Marcel Desailly, Paulo Sousa and Samuel Eto’o should the Italians come out on top.

Juve can be backed at 6.00 to defeat Barcelona in 90 minutes in the Olympiastadion, while they are 23.00 to triumph after extra-time and 15.00 to lift the trophy following a penalty shootout.