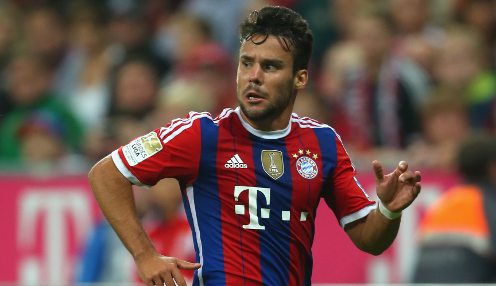 Juan Bernat was injured in Bayern’s 2-0 victory at Hoffenheim.

Bayern Munich head coach Pep Guardiola admits it will be difficult for his injury-ravaged side to turn around their Champions League quarter-final with FC Porto.

A 3-1 loss in the first leg in Portugal has left the Bavarians with something of a mountain to climb in the second leg in the Allianz Arena on Tuesday evening.

Obviously it will be difficult, but it is a big target for us.

However, Guardiola believes that his depleted squad will go into the game in good heart, having defeated Hoffenheim 2-0 on Saturday to move closer to retaining their Bundesliga crown.

He told his club’s official website: “We played very well in the first half and had the game under control. The second half was very complicated because our legs were heavy.

“I’m very proud of my players. We now have our most important game in the Champions League. Obviously it will be difficult, but it is a big target for us.”

The Spaniard will definitely be without Arjen Robben, David Alaba, Mehdi Benatia, Javi Martínez and Tom Starke for the showdown with Porto on Tuesday, but he has hopes of being able to field both Bastian Schweinsteiger and Phillip Lahm.

Schweinsteiger is hoping to shake off an ankle problem to feature, while Guardiola is upbeat about the prospects of Lahm recovering from gastroenteritis in time to take his place.

Guardiola does not expect to have Franck Ribery back after an ankle injury, but he is positive that Juan Bernat will recover from a knock sustained in the victory at Hoffenheim.