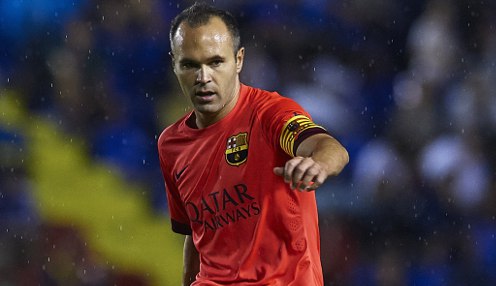 Andres Iniesta has a chance to become only the second player to feature in four Champions League-winning sides when Barcelona take on Juventus in Berlin.

The 31-year-old Spain international midfielder played for Barca when they lifted the trophy in 2006, 2009 and 2011 and a further triumph on Saturday evening would see him equal the mark of four victories by Clarence Seedorf.

Dutchman Seedorf, also the only man to win the competition with three different clubs, was crowned champion with Ajax in 1995, Real Madrid in 1998 and AC Milan in both 2003 and 2007.

I think the match against Juventus will be the most difficult of the season.

Now Iniesta can draw level with Seedorf, as long as he shakes off a calf problem sustained in the Copa del Rey final victory over Athletic Bilbao.

The long-serving Catalans ace does expect to be able to feature in the Olympiastadion on Saturday evening, telling reporters: “I hope to be fit enough to play.”

Iniesta can be backed at 6.50 to score at any time against Juve, with Barcelona 1.33 to lift the trophy and 11.00 to do so after extra-time.

Meanwhile, Barca’s superstar Brazilian forward Neymar has warned that Italian double winners Juve will be a tough nut to crack, as he looks forward to an evening of toil in the German capital.

He told Sky Sport Italia: “We know Juventus. They are a great team and haven’t reached the final by chance. It will be a tough game and we have to be at our best.

“I think the match against Juventus will be the most difficult of the season.”

Two of the giants of European football have only met in one previous Champions League tie, with the Bianconeri winning a tight quarter-final tie 3-2 on aggregate in 2003, before going on to lose in the final on penalties to AC Milan.