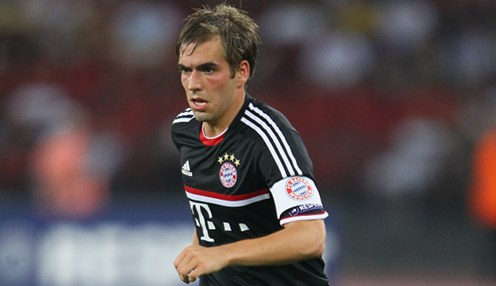 Philipp Lahm says Bayern Munich are relishing the chance to move a step closer to matching the 2013 Treble-winning season when they take on FC Porto.

Pep Guardiola’s men won 3-0 on Saturday to open up a 10-point gap at the top of the Bundesliga and are already through to the semi-finals of the DFB-Pokal. On Wednesday the Bavarians travel to Estadio Do Dragao to face Primeira Liga title-chasers Porto in the hope of securing a first-leg advantage in the quarter-finals of Europe’s elite club competition.

World Cup winner Lahm, now back fit after several months on the sidelines because of a fractured ankle, says the five-time winners are gearing up for an end-of-season trophy assault.

The 31-year-old said in an interview with Uefa.com: “We are confident enough to say that if we play our game, keep lots of possession and play attacking football, and don’t give our opponents many chances, then we will win. But they’re a dangerous team, with a lot of quality in attack, and fast and technically strong players in their squad.”

He added: “We are in the quarter-finals of the Champions League so there aren’t any easy teams any more.”

Bayern have won 11 games in all competitions since returning from the winter restart in Germany and Lahm says he and his team-mates are hoping to hit top gear soon.

He said: “It’s nice when the winter break is over, and the decisive matches come around. It can all end suddenly in the Champions League – every player knows that – so the second half of the season is more fun than the first, because things are really decided then.”

FC Porto are currently priced 4.75 in the match betting and the first-leg draw outcome is quoted 3.75. Bayern Munich are available to back at 1.83 in the 90 minutes market.