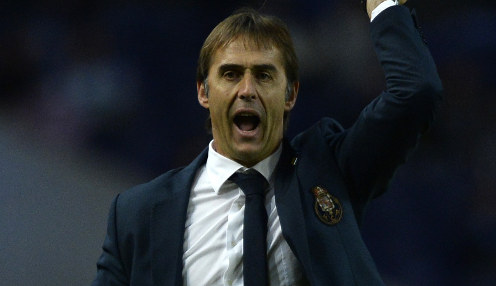 FC Porto head coach Julen Lopetegui says his side need to focus on their own performance if they are to knock Bayern Munich out of the Champions League.

The Portuguese take a 3-1 advantage to the Allianz Arena for the second leg of their quarter-final tie, with Lopetegui hoping to convince his players to stick with the approach and mentality which proved so effective in the Estadio Dragao.

He told reporters: “I don’t waste energy and time thinking about what will Bayern do. We need to focus on ourselves.

I don’t waste energy and time thinking about what will Bayern do. We need to focus on ourselves.

“We need to put into practice everything we have trained for. We cannot focus on what might happen – we must instead try to determine what does happen, out on the pitch. We will try to create chances and play our own game.”

Porto, 1.72 to reach the semi-finals, have Brazilian defensive duo Danilo and Alex Sandro absent due to suspension for the clash in the Allianz Arena, with Barcelona loanee Cristian Tello set to miss out due to injury.

Meanwhile, Bayern are set to be without French forward Franck Ribery, who is still struggling with an ankle problem, while Arjen Robben, Javi Martinez, Medhi Benatia and David Alaba are definite absentees.

But Pep Guardiola, who pledged his immediate future to the club on Monday, is upbeat about the prospects of both Bastian Schweinsteiger and Phillip Lahm being fit to feature.

Bayern can be backed at 6.00 to win the game on Tuesday 2-0 in normal time and are 2.10 to reach the semi-finals, while they are available at 5.00 to win the Champions League this season.