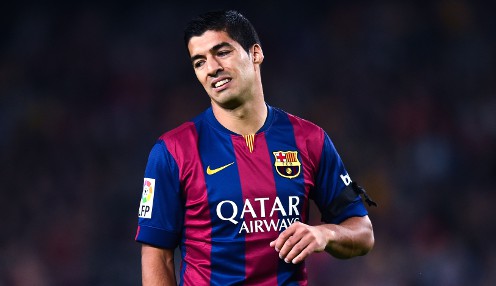 Luis Suarez has said Barcelona are determined to frank their outstanding form in 2015 with victory over Paris Saint-Germain in the Champions League quarter-finals.

Blaugrana have only lost two games so far in 2015 in an astonishing run which has seen them collect 20 wins in all competitions. On Sunday in La Liga they blew a two-goal lead to draw 2-2 with Sevilla but have a two-point lead over nearest-challengers and fierce rivals Real Madrid in the race to dethrone Atletico Madrid as champions of Spain.

“Playing in a team like this, where all the players want to win every match and everything, that is a sign that it’s all about silverware – whether it’s the Champions League, the Liga or whichever trophy’s available.”

On Wednesday they can put aside a compelling scrap for domestic honours when they travel to Parc des Princes to face the Ligue 1 leaders PSG for the first leg of a last-eight double-header.

Just two points separated the two clubs in the group stage and Barcelona have yet to win in three visits to the French capital.

However, Uruguay striker Suarez says Barca mean business and he is convinced they are genuine contenders to win Europe’s premier club competition.

“Of course,” he said, in an exclusive interview with Champions Matchday. “Barcelona are always a candidate to win the Champions League. That’s a plus here, as the clubs I’ve played for before didn’t really have the chance to win big [European] trophies – maybe a domestic league or cup.”

The 28-year-old says he senses a determination from the four-time winners to end the season on a high and be crowned kings of Europe in Berlin in June.

He added: “Playing in a team like this, where all the players want to win every match and everything, that is a sign that it’s all about silverware – whether it’s the Champions League, the Liga or whichever trophy’s available. We have a chance of making the final.”

Paris Saint-Germain are currently priced 5.00 in the match betting and the first-leg draw outcome at Parc des Princes is quoted 3.90. Barcelona are available to back at 1.75 in the 90 minutes market.