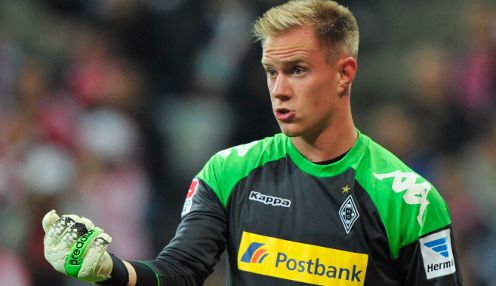 Marc-Andre ter Stegen is convinced Treble-chasers Barcelona are close to hitting top gear at exactly the right time of the season.

The Catalan capital giants thumped basement club Cordoba 8-0 at Estadio Nuevo Arcangel on Saturday and are two points clear of nearest challengers and bitter rivals Real Madrid at the top of La Liga.

“The Champions League is always special. I believe every player, every fan, every coach wants this trophy.”

When asked if he felt Barca were peaking at the right time, the 22-year-old replied: “Yes, I think so. We’ve made progress since the beginning of the season. We had a difficult start, then found some sort of consistency, and I think we have gradually improved, also by performing in the Champions League. Now we find ourselves in a good position.

“We’re in a good position in the league, we’re in the final of the cup, and it couldn’t get much better than this. It would be nice to keep that going until the end of the season.”

Now the focus switches to the Champions League and the visit to Camp Nou on Wednesday of Pep Guardiola’s Bayern Munich in the first-leg of the semi-finals.

Barcelona are focused on gaining revenge for their 7-0 semi-final defeat by the Bundesliga champions two years ago and ter Stegen warned they have to concentrate on securing a first-leg advantage.

“Coaches and players alike – myself included – don’t like to talk too far ahead; it’s far too early for that. But if we take it step by step and stay focused, also in the league, then we have a good chance. That’s our aim, and we hope to reach and build on it,” he said, in an interview with Uefa.com.

The summer signing from Borussia Monchengladbach says his dream is to win the Champions League but knows Barca have to wary of the German title winners.

He added: “The Champions League is always special. I believe every player, every fan, every coach wants this trophy. It is unbelievable, and it is one of the greatest achievements you can have in football. And that is what we fight for every day.”

Barcelona are currently priced 1.72 in the match betting and the draw outcome is quoted 3.90. Bayern Munich are available to back in the 90 minutes market at 5.25.