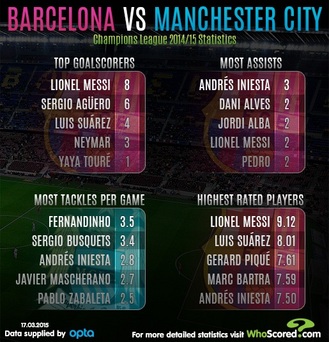 We asked the experts at WhoScored.com to help you pick your perfect Ultimate XI ahead of Tuesday’s Champions League second leg. With tokens counting for double points, follow their tips and you could get on the leaderboard and scoop a Free £10 Bet…

The fact that Manchester City must score at least twice to have any chance of qualifying will surely affect Manuel Pellegrini’s approach to the game and, though the Chilean is tipped to ditch the 4-4-2 formation, Sergio Aguero is certain to keep his place. The Argentine has opened the scoring in three Champions League matches this season so if the visitors can get off to a strong start it will likely be through their top scorer. In comparison Lionel Messi has only scored the first goal of a Champions League game once this season. But, with goals in his last three European outings, Luis Suarez is worth considering if you fancy Barca to open the scoring.

This is where the lure of selecting Messi may be too hard to resist, with only Shakhtar’s Luiz Adriano netting more Champions League goals this season (8). With a man of the match token to assign, however, it may still be best to hold fire. With that in mind, depending on your tip for first scorer between Aguero and Suarez, the other is perhaps your best bet here. The City forward may have the edge having only scored more goals against Spurs and Espanyol in his career than Barcelona (7).

It’s been a disappointing season for Andres Iniesta in general but there’s still little doubting his ability to pick the lock of even the safest of defences (of which City are not one). The Spaniard has three assists in this season’s Champions League – more than any other player from either of the two sides on Wednesday night – and tends to be influential against English opposition, setting up Dani Alves’ winner when these sides met at Camp Nou last year.

This decision will depend on Xavi’s involvement in proceedings in midweek but with Javier Mascherano expected to play in the holding midfield role in the absence of the injured Sergio Busquets we’ve opted for yet another Argentine. With the hosts likely to dominate possession the choice is between the former Liverpool man and his likely deputee at the back Marc Bartra, who have averaged a near identical number of passes in the tournament thus far (Mascherano 78.5, Bartra 79).

With Barcelona’s penchant for possession football in mind City will surely have to do a lot of chasing and get through a great deal of work in midfield. That’s what Fernandinho was signed for and the Brazilian has, perhaps unsurprisingly, made more tackles in this season’s Champions League than any other Barca or City player (21), despite three of his six appearances coming from the bench thus far.

Man of the Match – Lionel Messi

If you’re confident enough to avoid Messi for one of your goalscorer tokens, holding out for the man of the match award is likely to be the wisest choice. The 28-year-old has been in sparkling form since the turn of the year, earning WhoScored.com’s man of the match award in a remarkable 13 of his last 14 appearances in all competitions, ranking first in this season’s Champions League ratings to boot (9.12).