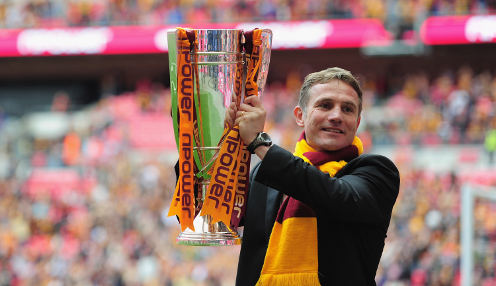 Phil Parkinson will tell his Bradford City players only a performance of the season will be good enough to see off Reading in the FA Cup quarter-finals.

The League One play-off hopefuls will look to continue their giant-killing act when they host Championship side Reading at Valley Parade on Saturday in the last eight of the famous old cup competition. The Bantams have already knocked out Chelsea and Sunderland in their attempts to reach the final for the first time since 1911.

The visit of the Royals takes on more significance for Parkinson because he spent 11 years with them as a player, but the manager is taking nothing for granted.

He says his players have to concentrate on the task in hand and forget about any misty-eyed ambitions of reaching Wembley for now.

“We don’t fear them but we definitely respect them,” he told reporters.

“Obviously we’ve got to take the experience of a couple of years ago and this season into the game. Looking at the lads, there’s an air of confidence.

“We’re enjoying testing ourselves against these teams, right from the Millwall game, the Leeds game in the League Cup, Chelsea [and] Sunderland.”

Reading head to West Yorkshire having lost just one of their last seven away games and Parkinson has suggested small detail will decide the contest.

“We’re under no illusions at all that to get through this game we’re going to have to play probably better than we’ve done at any point this season,” he added.

“We can’t think too much of the prize of Wembley, we’ve just got to concentrate on the factors that are important in the 90 minutes.”