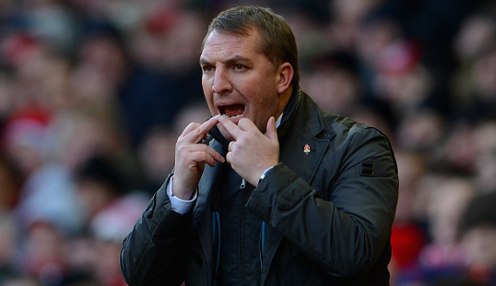 Brendan Rodgers has denied reports of a crisis meeting with his Liverpool players but admitted they need a response against Blackburn Rovers in the FA Cup.

A 4-1 reverse against fellow top-four hopefuls Arsenal on Saturday was the club’s second straight defeat following a loss by bitter rivals Manchester United at Anfield. It leaves the Merseysiders seven points adrift of the Champions League qualification places.

“We have lots of meetings here analysing performance and this one was no different.”

Rodgers denied reports some players had reacted angrily to his suggestion that they were not playing for him and insisted his post-match brief was business as usual.

Rodgers said: “The team might be short of certain elements but in terms of commitment and focus, it’s pretty clear.”

The Northern Irishman added: “We have lots of meetings here analysing performance and this one was no different.”

The gap to fourth place will be increased if Manchester City collect maximum points against Crystal Palace on Monday but Rodgers said he had not ruled out securing Champions League football.

“After the game [against Arsenal] I gave an answer which was logical in terms of the difficulty we have but it is not certainly a mindset,” he said.

“Our attitude is to go right to the end. We would have to win our seven games but it is certainly something we will go into in order to do that.”

The 42-year-old said Wednesday’s FA Cup quarter-final replay against Blackburn Rovers gives his players the ideal opportunity to bounce back.

“It’s important to have a game quickly when you lose,” he added. “The group’s very committed to winning this trophy.

“We know Blackburn will be a difficult game for us, but getting to a final and winning a trophy is what we want.”

Blackburn are quoted 5.50 in the 90 minutes betting and the draw outcome is priced 3.80. Liverpool are available to back at 1.61 in the match betting.