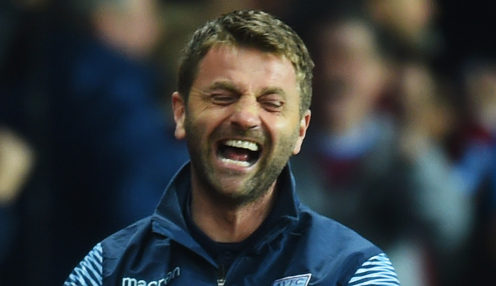 Tim Sherwood is looking forward to Aston Villa being the underdogs again when they face Arsenal in the FA Cup final on 30th May.

Villa upset the formbook by coming from behind to beat Liverpool 2-1 in Sunday’s semi-final at Wembley, Christian Benteke and Fabian Delph netting after Philippe Coutinho had given the Reds the lead.

Sherwood only took charge at Villa Park less than ten weeks ago, but he has revived the club’s fortunes in the Premier League and now guided them to their first FA Cup final appearance for 15 years.

The pressure is on Arsenal as they are the holders.

Premier League victories since Sherwood replaced Paul Lambert in the Villa Park hot-seat against West Brom, Sunderland and Tottenham have left Villa 15th in the table, four points clear of the bottom three and they are now 10.00 to be relegated and 3.50 to win the FA Cup outright.

“We will be the underdogs,” said Sherwood. “The pressure is on Arsenal as they are the holders.

“But for now we have to put the FA Cup final on the backburner. There is a lot of hard work between now and that game. It’ll be a great occasion for the football club but nothing is won yet.

“We need to secure our safety and then come back and take the game to Arsenal.”

Sherwood was also quick to praise Delph, who produced an outstanding display on Sunday, culminating in his winning goal.

The former Spurs boss added: “When I came to the club Fabian Delph had just signed a new contract. He’s showed a lot of loyalty and he will do for me.

“We need characters like that who are willing to put themselves on the line. I’ve never seen him have a bad day for England at Wembley and hopefully he’ll play well in the final.

“He’s nicked a couple of goals for us recently and I’ve been encouraging him to do that. Hopefully he’ll carry on that way and become too expensive for anybody to buy.”