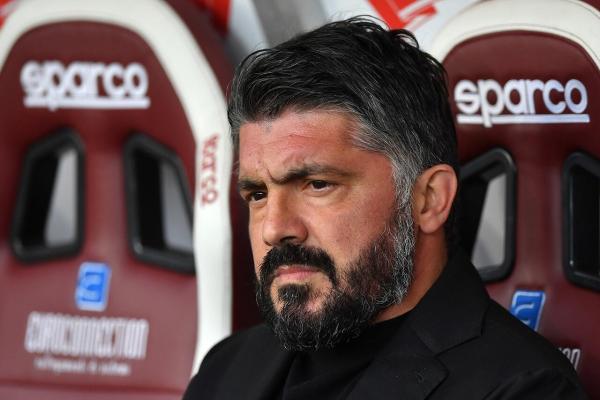 Liverpool to finish season in style

Liverpool are one of three teams battling it out for the final two Champions League spots and with a home game against Crystal Palace to end their season, the Reds will be confident of keeping hold of fourth spot.

In the latest midweek games, Jurgen Klopp’s side climbed above Leicester to within a point of Chelsea in third place and if momentum is to be a factor on the final day of the season, Liverpool should be rubbing shoulders with the best teams in Europe next season.

The Reds have taken 23 points from a possible 27 and with Mohamed Salah level with Tottenham’s Harry Kane for the Golden Boot award, the Egyptian will have extra motivation to find the net against the Eagles. Liverpool supporters will be in attendance and their collective voice should inspire their team to victory.

It promises to be an emotional day for Palace manager Roy Hodgson who will leave the Eagles after this game. As a former Liverpool manager, Hodgson will be guaranteed a warm reception and his players will hope to end his tenure with a win.

Gattuso’s side need a fast start against Verona

Napoli to score first against Verona at 1/5

Serie A is preparing itself for one of the best finales in recent years as three teams battle it out for the two remaining Champions League spots. Napoli, Milan and Juventus are all separated by just one point, but which side will miss out on Champions League football next season?

Napoli will hope it is not them, but they know they cannot afford to slip up in their final game of the season at home to Verona. Gennaro Gattuso will be keeping up to date with how Juventus are getting on at Bologna knowing the Naples side only have to better Juventus’ score to finish in the top four.

Nerves can be a factor in situations like these, but if Napoli can get an early goal, it should settle Gattuso’s side. Scoring first has not been a problem for Napoli who have done so in their last eight Serie A games. All eight of those opening goals have come before the 36th minute.

Verona have conceded the opening goal in four of their last six matches which makes the home side favourites to score the first goal at 1/5.

Both teams to score in Osasuna v Sociedad at 6/10

Sociedad travel to Pamplona holding fifth spot which will see Imanol Alguacil’s side play in next season’s Europa League. But they could finish the weekend representing La Liga in the first ever Europa Conference League if they fail to win and Villarreal and Real Betis both pick up three points.

For six weeks up to the middle of December, Sociedad were second and on course to return to the Champions League for the first time since 2013/14, so featuring in the Europa League is not ideal for a club with high ambitions.

Osasuna finish their campaign at home and while there is no European football or relegation attached to their outcome, they can satisfy themselves by possibly climbing two places and finishing ninth which would be an improvement on last season’s tenth place finish.

Both Sociedad and Osasuna have scored in the last five meetings which makes ‘both teams to score’ a favourable bet in this fixture at 6/10. Both teams to score has also paid out in Osasuna’s last three league games and Sociedad’s previous two contests.

Ligue 1 could not have wished for a better final day with three teams in contention of winning the title. Lille lead Paris St-Germain by a point while Monaco are three points behind the current leaders. It’s the first time in almost 20 years that the top two French teams enter the final day separated by a single point. 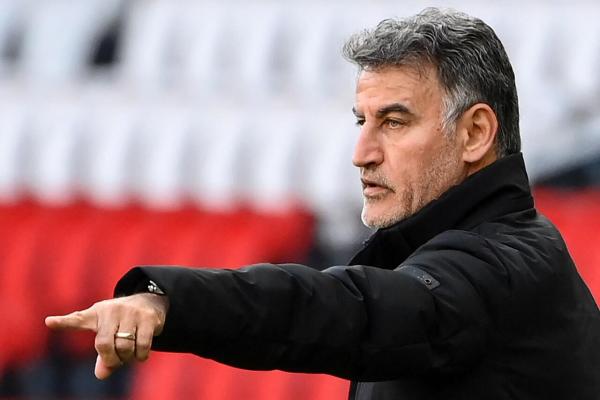 The pressure is on Christophe Galtier’s side to take care of business, but they would have wished for a home game to sign off with rather than a trip to Angers who are safe from relegation despite losing five of their last six Ligue 1 games.

It could be an anxious evening for Lille who just have to concentrate on beating Angers and not get distracted by what might be happening with their rivals. Under 2.5 goals has paid out the last five times Lille have travelled to the Stade Jean-Bouin and another low-scoring game could be on the cards at 19/20.

This is not the game to go gung-ho and if Lille have to wait until the second half to take the lead, then so be it. Lille lead the league in games with under 2.5 goals scored with 23 and they are unbeaten in all 23. They do not leave themselves exposed at the back and they will be happy to keep this a low-scoring game.

This will be Schalke’s last Bundesliga game for a while, but they will hope their relegation to the second tier is just for one season. Defeat will see Friedhelm Funkel’s Cologne wave goodbye to the Bundesliga and even victory might not be enough to save them if Werder Bremen and Arminia’s results go against them.

Schalke produced their best result of the season last weekend, not that there have been many to choose from, when they beat Eintracht Frankfurt 4-3. It took their goals tally to 11 in their last three games. They had scored 10 times in their previous 19 league matches.

Cologne should expect their opponents to come at them right from the start and patience might be the key for the home side who will need to time their attacks carefully and take their chances when they come. Schalke’s last three games have produced 16 goals while Cologne’s last four home games have seen 14 goals scored.

Over 2.5 goals paid out in five of last weekend’s Bundesliga matches and could well land this time for the third successive meeting at 1/3.

The fivefold pays out at almost 11/2 (6.49) on the sportsbook (correct at the time of publication) 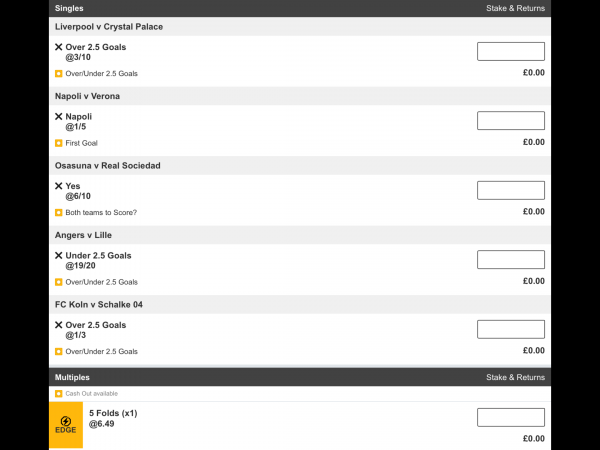