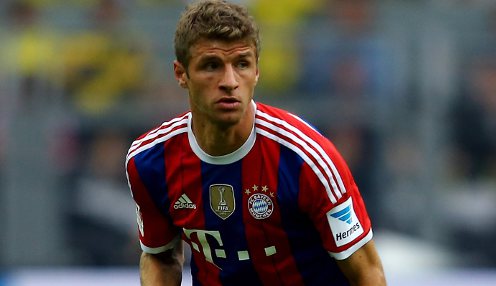 Bayern Munich have ruled out allowing Thomas Muller to join Manchester United, with Bastian Schweinsteiger set to make the move to Old Trafford.

The Red Devils are poised to tie up a deal to sign Schweinsteiger, with Bayern determined to hold on to fellow Germany Word Cup-winner Muller as a consequence.

We have never received an offer for Thomas Muller.

Chief executive Karl-Heinz Rummenigge told Sport 1: “Bastian’s was a very special situation. I can reassure all the fans we will not be selling another player to Manchester United.

“We have never received an offer for Thomas Muller.”

Versatile forward Muller, 25, has spent the whole of his career to dater with Bayern, helping them to win four Bundesliga titles, 3 DFB-Pokals, the German Supercup twice, the Cub World Cup and the Champions League.

Earlier, Rummenigge had admitted that they had done all they could to try and convince Schweinsteiger to stay put, but eventually accepted that the 30-year-old wanted to move on.

He added: “We tried to convince him to stay with Bayern Munich, but I also understand that a player who has spent 17 years at Bayern Munich, at the end of his career still wants to gain a new experience.

“He has done great things here, he has won everything. I suggest to him that we will give him a great farewell match in Munich when he finishes his career, whenever that will be.”

Bayern can be backed at 1.10 to retain their Bundesliga title next season, while they are 6.00 to triumph in the Champions League.