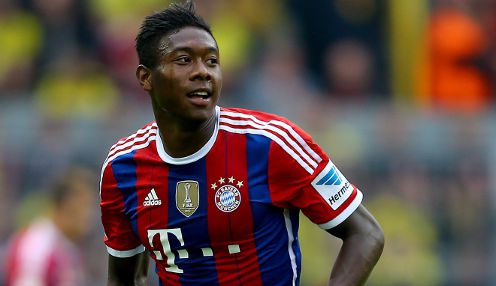 Bayern Munich manager Pep Guardiola has been dealt a blow with the news that full back David Alaba is likely to miss the remainder of the season.

The Austrian international damaged ligaments in his left knee playing for his country in a friendly against Bosnia-Herzegovina on Tuesday night.

The 22-year-old was forced off at half time and tests carried out when he returned to Germany have confirmed he has torn ligaments.

The expected seven-week layoff is likely to sideline Alaba for the remainder of the Bundesliga campaign as well as their bid for Champions League glory.

Despite a prognosis that should keep him out until the final throws of the German domestic season, Alaba is determined to return this season.

“Of course I’m deeply sad, but I have a big goal in my eyes and I want to be back for the end of the season,” Alaba told Bayern’s website.

“I’m going to get a good rest now and then give it my all in rehabilitation.”

Bayern travel to old foes Borussia Dortmund on Saturday as they seek to protect their Bundesliga advantage over second placed Wolfsburg.

Alaba recently made his 100th appearance for Bayern in their 2-0 defeat to Borussia Monchengladbach and he has featured 28 times for the German champions this season to date.

It is not the first time this season he has been forced out with knee trouble, having done similar damage to his right knee before Christmas.

Bayern face FC Porto in the last eight of the Champions League later this month and Guardiola’s side are 2.75 to win the competition this season.