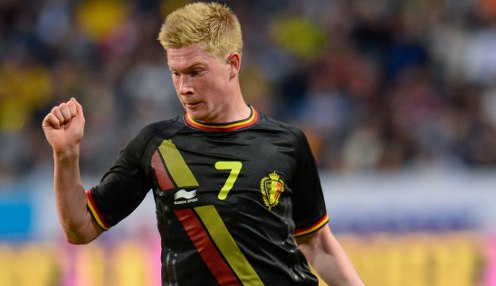 The 23-year-old Belgium international has been a big hit since his arrival at Wolfsburg from Chelsea 18 months ago and has been a key figure in his side securing Champions League football for next season.

Wherever he plays next season it will be in the Champions League.

However, he may not be around to help the Wolves next term, with agent Patrick De Koster confirming that interest has been shown from three major players in European football.

He told talkSport: “I have a meeting with sporting director) Klaus Allofs next week to find out what they want to do. I will know if they want to offer a Kevin a new deal or allow him to move.

“Manchester City, Bayern Munich and Paris Saint-Germain have made informal contact with me, but there have been no official offers.

“If Wolfsburg decide to sell Kevin, then he will have a choice of clubs who can win their domestic league and challenge for the Champions League as well. The choice is his.”

Wolfsburg have two Bundesliga games left to play this season, one of which comes against Borussia Dortmund, who are also their opponents in the DFB-Pokal final.

The Wolves, who recently announced a deal to sign Borussia Monchengladbach forward Max Kruse for next season, are 2.00 to win the German Cup for the first time in their history, with Dortmund 1.80.

Don’t forget, all Bundesliga matches are covered by the bet365 100% Euro Soccer Bonus, where you could earn a bonus of up to 100% on your returns on pre-match accumulator bets. T & Cs apply.