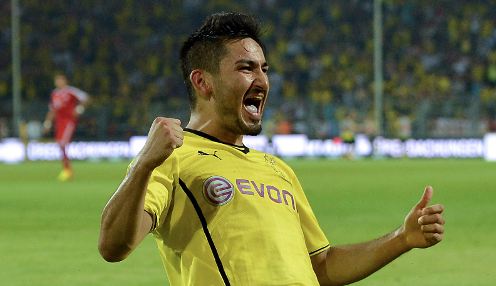 Borussia Dortmund general manager Hans-Joachim Watzke says there is still a chance that Ilkay Gundogan could stay with the club through the summer.

The 24-year-old Germany midfielder looked certain to leave the Bundesliga outfit after rejecting the offer of a new contract, with a host of top clubs interested in his services.

Maybe there is still a chance that he has a rethink.

However, Watzke now says that talks have begun again over a possible new deal, with Gundogan seemingly undecided over his best option.

Watzke told German newspaper WAZ: “Maybe there is still a chance that he has a rethink. We are in talks and Ilkay is a decent lad.”

BVB had previously signalled that Gundogan was likely to move on despite having another year left on his current deal, tweeting: “Borussia Dortmund and midfielder @Guendogan8 will not work together beyond June 30, 2016. @Guendogan8 has decided not to renew his contract beyond this time.”

Meanwhile, Dortmund are reported to be one of the clubs showing an interest in Wolfsburg striker Bas Dost, with both Ciro Immobile and Henrikh Mkhitaryan linked with possible moves away from the Westfalenstadion this summer.

Dutchman Dost scored 16 times in 21 Bundesliga appearances last season as Wolfsburg finished second in the table behind Bayern Munich, while he also found the net in the final of the DFB-Pokal as Wolves defeated Dortmund 3-1.