Gundogan opts to stay at Dortmund 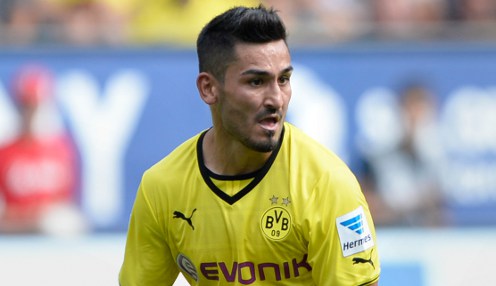 Manchester United’s hopes of signing Ilkay Gundogan have been quashed after the midfielder opted to pen a new two-year deal with Borussia Dortmund.

It had been thought earlier this summer that the 24-year-old would definitely be leaving Dortmund but he has now decided to stay with Thomas Tuchel’s side until June 2017.

“The first days of pre-season are over and it’s been fun to work with the coaches and my team-mates,” said Gundogan. “I’m happy that we finally have clarity and I can continue playing football for Borussia Dortmund. I’ll turn my focus immediately to preparation – in August we want to attack fully again.”

I’ll turn my focus immediately to preparation – in August we want to attack fully again.

Gundogan featured in 33 matches last season after a back injury restricted him to just three Bundesliga appearances in the 2013/14 campaign.

Gundogan joined Dortmund in the summer of 2011 from Nurnberg and he helped the club win the Bundesliga and DFB-Pokal double in the 2011/12 season.

He also played a vital role when Dortmund reached the Champions League final in May 2013, Bayern Munich eventually clinching a 2-1 victory against their Bundelsiga rivals.

Last season, Dortmund finished in seventh place in the Bundesliga and they also reached the final of the DFB-Pokal but Jurgen Klopp decided to leave the club at the end of the campaign.