Gundogan to make decision on his future 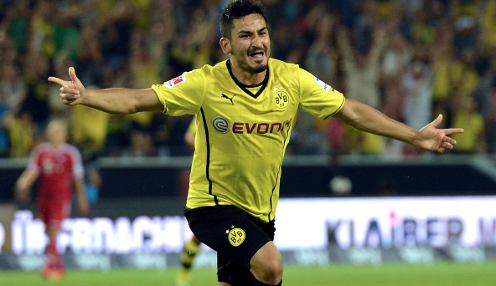 Germany midfielder Ilkay Gundogan has announced he will decide on whether to stay or leave Borussia Dortmund at the end of the month.

The 24-year-old has one year left on his current contract at Signal Iduna Park but his future in Bundesliga has been the source of conjecture, amid reported Premier League interest from Manchester United and Arsenal.

“What is important to me is that I’m not gambling financially or using delaying tactics.”

Reports this week suggested Barcelona and Bayern Munich were also monitoring his situation but were put off by his wage demands. Gundogan released a statement on social media to hit out at “ominous” speculation and moved to clarify his position.

He wrote: “Normally I do not address media reports, especially not on Facebook. I want to this time to explain some things and give you a better insight.

“In recent weeks, I, like you, read again and again that where I was signing was already agreed.

“Today I am in contract negotiations here, tomorrow I’m having a medical check there. At first I could still smile about it, but when there was talk of “contract poker” and “rip-off”, that painted me in a bad light.

“Yesterday an ominous number [regarding wage demands] appeared in the media and so I have now decided to say something about it.

“Although so far there have hardly been any transfers completed in Europe, rumour to rumour I was supposed to have demanded more and more, putting off making a final decision.

“Forgotten was this: I have one more year on my contract with BVB [Dortmund].”

The former Nurnberg star said he will make a decision on his future after Germany’s Euro 2016 qualifier against Gibraltar at Estadio Do Algarve in Portugal on Saturday.

He added: “What is important to me is that I’m not gambling financially or using delaying tactics.

“What’s next for me personally, I will reveal as soon as possible.

“But only after the season and our important game for the European Championship qualifier with the national team will I decide.”

Borussia Dortmund finished 33 points behind champions and rivals Bayern Munich in Bundesliga last season and are currently priced in the outright winner market at 21.00.