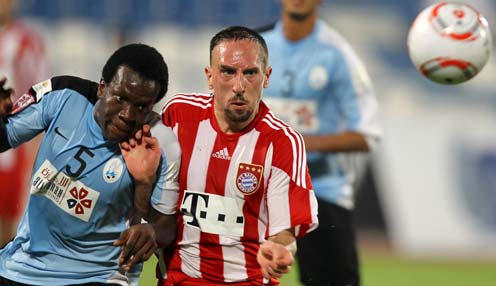 Bayern Munich have announced France winger Franck Ribery has suffered a setback in his rehabilitation from an ankle injury.

The 32-year-old has not played for the Bundesliga champions since picking up the injury in the Champions League second leg against Shakhtar Donetsk back in March.

Ribery had hoped to return to competitive training in early July but the club revealed on Friday he was having his ankle “immobilised” on medical advice after “conservative therapy” failed.

The news is a bitter blow for Ribery, who has endured a problematic 12 months and was forced to miss the World Cup in Brazil last year for France because of a back problem.

“We will be fully supporting Franck in every aspect of the healing process and hope he will soon be back on the field of play,” sporting director Matthias Sammer told Bayern’s official website.

Pep Guardiola has told his title-winning players to report back to the Sabener Strasse facility for the first training session of the new season on 1st July.

The club will take part in the Telekom Cup 2015 in Monchengladbach before embarking on a pre-season tour of China at the end of the month. The DFL Supercup takes place on 1st August.

Last season the Bavarians were confirmed Bundesliga champions for a third successive campaign and 24th time in the club’s history, but they were knocked out of the Champions League by Guardiola’s old club Barcelona in the semi-finals and saw their DFB-Pokal hopes dashed by Borussia Dortmund on penalties in the last four of the competition.