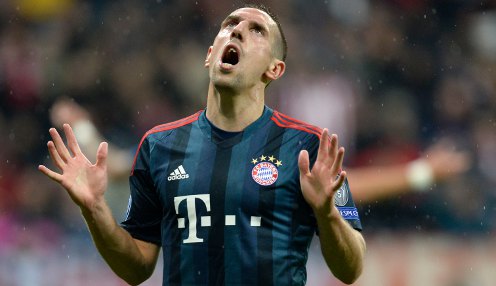 Franck Ribery will not be fit to play in the German Super Cup against Wolfsburg next month, Bayern Munich coach Pep Guardiola has confirmed.

The 32-year-old winger has not played for the Bavarians since injuring his ankle in a 7-0 victory against Shakhtar Donetsk in the Champions League in March and suffered a setback in his recovery last month.

“He won’t be ready for the first game of the season, but it’s getting better. I’m optimistic.”

The Bundesliga champions ramp up their pre-season preparations on Saturday when they open their tour of China against Valencia but five-time German title winner Ribery will not be involved.

Guardiola also revealed the France veteran is unlikely to be ready for the Volkswagen Arena season-opener against Wolfsburg at the start of August.

“He won’t be ready for the first game of the season, but it’s getting better,” he told reporters. “I’m optimistic.”

The Allianz-Arena giants will next season hope to make history by winning a fourth straight Bundesliga title and have signed Douglas Costa, Joshua Kimmich and Sven Ulreich this summer.

Guardiola said he was satisfied his new-look squad is taking shape and was looking forward to Saturday’s pre-season test against La Liga side Valencia at Beijing National Stadium in China.

“We’ll give it our best shot and try to do as well as we can against a Champions League team,” said Guardiola. “But we’re very much still in pre-season.

“We’ll try to push the players even more, so we’re ultimately in a position to beat the best teams in the world.

“We’ll go for it again this season with everything we have.”

Bayern Munich are currently priced 1.10 to win next season’s Bundesliga and quoted 6.00 in the Champions League outright betting.