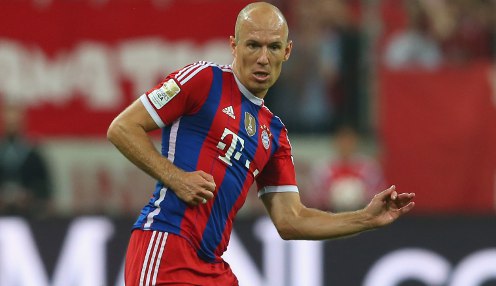 Bayern Munich and Netherlands star Arjen Robben may not play again until mid-May after tearing some stomach muscles on Sunday.

The 31-year-old former Chelsea and Real Madrid winger had to be taken to hospital after suffering the injury during Bayern’s 2-0 defeat to Borussia Moenchengladbach and looks set to be sidelined for between six and eight weeks.

Despite the loss, which was Bayern’s first home defeat of the season, they are 1.001 to win the Bundesliga title once again this term.

World-class is hard to replace.

The Dutch Football Federation (KNVB) has confirmed Robben will miss Saturday’s Euro 2016 qualifier against Turkey as well as next Tuesday’s friendly with Spain.

Robben, who has scored 17 goals in 21 Bundesliga matches for Bayern this season, seems certain to miss both legs of next month’s Champions League quarter-final against FC Porto.

“World-class is hard to replace,” said Bayern’s director of sport Matthias Sammer. “You have to deal with setbacks. That is the feature of a winner and we want to be winners.”

Pep Guardiola’s side can be backed at 2.75 to be crowned European champions for the second time in three seasons.