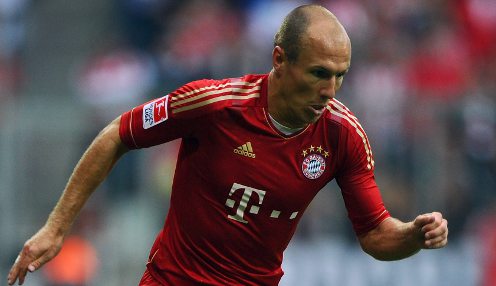 Newly-crowned Bundesliga champions Bayern Munich could welcome back Arjen Robben for the DFB-Pokal semi-final clash against Borussia Dortmund on Tuesday.

The Netherlands international returned to training at the weekend after five weeks on the sidelines because of a torn abdominal muscle. He was joined by Mehdi Benatia, who suffered a torn muscle during the DFB-Pokal quarter-final against Bayer Leverkusen.

Robben told the official club website: “It’s great to be on the pitch again.”

The Bavarians won a third straight title – and 24th in the club’s history – on Sunday because of Wolfsburg’s 1-0 defeat by Borussia Monchengladbach. So far this season they have won 24 of 30 top-flight games, losing just twice, and scored 77 goals – 14 more than Wolfsburg in second place.

They have already completed a Bundesliga double over BVB this season, but lost to Jurgen Klopp’s men in the German Super Cup in August last year, while they are also bidding for their third consecutive domestic double and second treble in three years.

Chairman Karl-Heinz Rummenigge said: “Retaining the title is a magnificent achievement. All credit to the coach and the team. They’ve been fantastic throughout, in a season following a World Cup where we had a host of players in action.

“We’ll have a magnificent party at some stage, no worries. But all in good time. When we do, it’ll be a huge celebration.”

Bayern Munich are currently priced 3.50 to win this season’s Champions League and Barcelona are quoted 3.00.