Schweinsteiger told to make up his mind 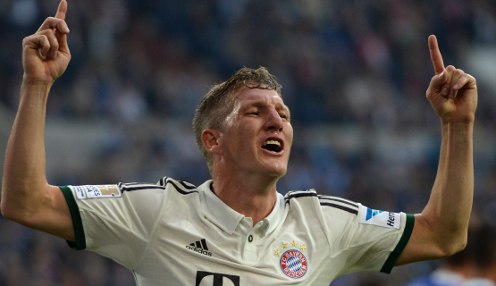 Bastian Schweinsteiger has been linked with a move to the Engish Premier League.

Bayern Munich boss Pep Guardiola has told midfielder Bastian Schweinsteiger to decide whether or not his future is with the Bundesliga club.

The German has been heavily linked with a summer move to Manchester United, where he would be reunited with former Bayern boss Louis van Gaal at Old Trafford.

Guardiola says he would love to have Schweinsteiger at the Allianz Arena next year but he says the 30-year-old must make up his own mind on where his future lies.

Basti has to decide. I told him, the future depends on you.

“Of course I am planning to work with Basti next season. Basti has to decide. I told him, the future depends on you.”

Schweinsteiger attempted to cool speculation on his future recently by suggesting he wanted to be part of the first Bayern Munich team to win four successive Bundesliga titles next season.

Guardiola’s team are 1.10 to win the German title again next season but the former Barcelona boss appears to remain unsure whether or not Schweinsteiger will be around.

A World Cup winner with Germany last summer, Schweinsteiger came through the youth ranks at Bayern and has spent 13 seasons at the German club, winning eight Bundesliga titles and a Champions League crown.

Van Gaal is interested in bringing the midfielder to the Premier League as he seeks to turn Man United into genuine title contenders against next season.

The Red Devils are 6.00 to win the Premier League title next season.