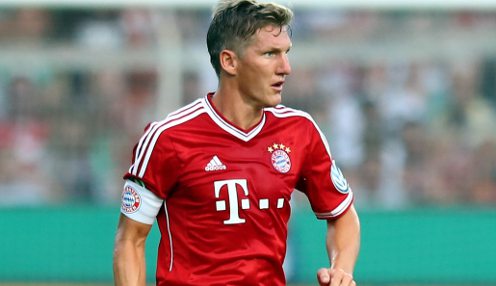 Bastian Schweinsteiger has distanced himself from transfer speculation by claiming he wants to help Bayern Munich become the first club to win four successive Bundesliga titles.

The future of the 30-year-old at the Allianz Arena has been the subject of debate in Germany this summer following reports he was looking to leave the Bavarians.

The World Cup winner had something of a limited role in Pep Guardiola’s team last season, starting just 15 Bundesliga matches.

Despite having helped Bayern win eight Bundesliga titles, the 2013 Champions League and numerous other trophies it was being reported that the German giants could let him leave should he decide he wanted to move on.

Manchester United are said to be big admirers of Schweinsteiger but the midfielder has now quelled talk of him moving on by outlining his ambitions for next season.

Despite having won nearly every major honour in football, Schweinsteiger is hungry for more success and is chasing a fourth consecutive Bundesliga title, with Bayern 1.10 to retain their crown.

He told broadcasters Sport1: “We’ve won the Bundesliga for three consecutive times, no team ever has managed to win it four times. That’s a motivation

“I feel good and I’m ready to play the next three years at the top level. That’s my goal.

“Winning big trophies like the Champions League or the World Cup is usually making people think ‘The player are not hungry any more’. Still that’s not what I feel.”

Bayern start the defence of their Bundesliga crown against Hamburg on Friday 14th August and are 1.11 to begin the campaign with a win, while the visitors to the Allianz Arena are 23.00 and the draw 8.00.