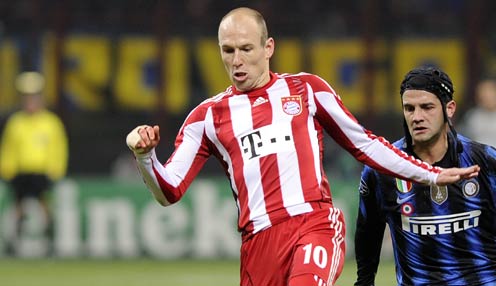 Shakhtar coach Mircea Lucescu has said he expects Douglas Costa to enjoy the same levels of success as Arjen Robben when he completes his move to Bayern Munich.

The Bundesliga champions have yet to confirm an agreement has been reached for the 24-year-old but reports suggest the midfielder will complete a summer move to Allianz-Arena.

“He’s only 24 years old and could reach [Robben’s] level in the coming years.”

The Sapucaia do Sul-born star, who is away on Copa America duty, has spent six seasons with the Ukrainian giants but has been courted by a number of European clubs.

Lucescu is in no doubt the Chile international will be a big hit in the German top flight and feels he will make the same impact as Netherlands flyer Robben.

“It seems normal to me that they wanted him so much,” he told Dolce Sport.

“Inter [Milan] were also in the chase for Douglas – the boy can be the new Robben!

“He’s only 24 years old and could reach [Robben’s] level in the coming years.”

Lucescu also revealed Brazil striker Luiz Adriano, who scored 21 goals in all competitions last season, had turned down an offer to join Al Ahli in Dubai.

“But maybe they will compete with other clubs such as Rome, Milan, Monaco, those who have wanted him in the winter.

“He has six months left on his contract, but it would be good for us to get some money on it.”

The 28-year-old, who joined Shakhtar from Internacional in 2007, has won six Ukrainian Premier League titles, four Ukrainian Cups and the 2009 UEFA Cup during his time with the club.

Bayern Munich are currently priced 1.10 in the Bundesliga outright winner betting and quoted 6.00 to win next season’s Champions League.