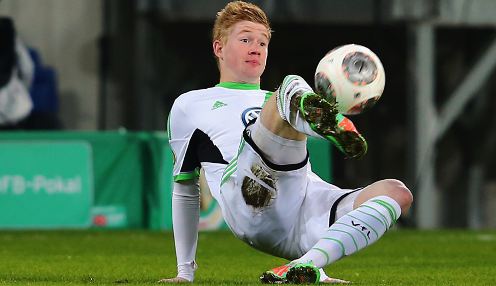 Wolfsburg sporting director Klaus Allofs has again made it clear that the Bundesliga club are keen to hold on to the Belgian playmaker Kevin de Bruyne this summer.

The 24-year-old former Chelsea forward is one of the hottest properties in Europe after a stunning campaign with the Wolves, in which he helped the club to second place in the German top-flight and success in the DFB-Pokal.

However, Allofs and the club hierarchy are determined to try and keep De Bruyne, with the player already under contract until the summer of 2019.

Allofs told German broadcaster Sport1: “Kevin has a contract until 2019, so the signal has already been sent out. He will stay with us. We’ve said we will look at his contract.

“The aim is to take into account financially Kevin’s extraordinary development and I think we will reach an agreement here very quickly.”

Meanwhile, Allofs has also cooled talk of Dutch striker Bas Dost wanting to leave the club this summer, with a number of clubs in England also reported to be tracking the big frontman.

He added: “We spoke to his agent for the first time over the last week and it has not turned out that Bas wants to leave. He feels very well in Wolfsburg.”

Meanwhile, Wolfsburg can be backed at 17.00 to win the Bundesliga title next season, with Bayern Munich 1.10 and Borussia Dortmund 21.00.