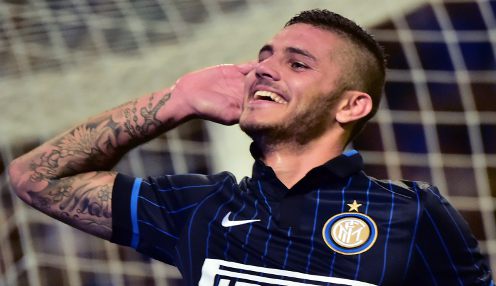 The 22-year-old finished the season as the joint highest scorer in Serie A with 22 goals, having scored twice on the final day of the season in a 4-3 home win over Empoli.

I’m sure that with the boss (Roberto Mancini) we’ll succeed.

And Icardi, who joined Inter in the summer of 2013 from Italian rivals Sampdoria, had been mentioned as a possible target for clubs in both Spain and England.

However, he has now extended his contract with the Nerazzurri until the summer of 2019 and believes that Inter can improve under head coach Roberto Mancini next season.

The South American told his club’s official website: “I didn’t expect to do so well this season, so I’m delighted. The team has helped me to score goals and that’s why I’ve achieved this.

“I’m very happy that we finished the season on a high at the San Siro. We will start next season with the memory of a win and that’s a great way to kick things off.

“I’m sure that with the boss (Roberto Mancini) we’ll succeed – we’ve been working well for a good five or six months now and we’ll get better in pre-season.”

Inter finished down in eighth place in Serie A this season and missed out on qualifying for European action next term.