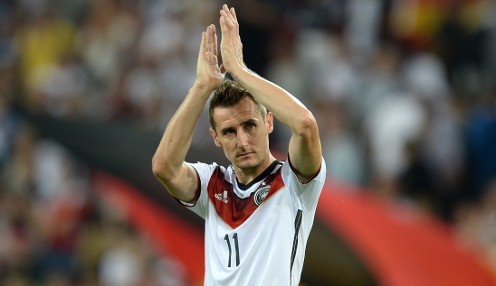 Veteran German striker Miroslav Klose says he will stay with Lazio to see out the final 12 months of his contract with the Champions League qualifiers.

The Biancoceleste finished third in Serie A last season to secure a place in the play-off round of the Champions League, with Klose ending the campaign as their leading scorer in the league with 13 goals.

To play another season for Lazio is a decision that I made with the heart.

Despite that success, Klose had been linked with a move back to Germany to end his illustrious career, but the 37-year-old has now committed himself to a fifth season in the Italian capital – with Lazio 101.00 to win the Champions League.

He confirmed via Facebook: “To play another season for Lazio is a decision that I made with the heart. My family and I are doing very well in Rome and at Lazio.

“The fans are amazing and pass on their love and warmth to us every day. They are truly unique.

“I also want to give my support to our coach, who is a very special person, and to the whole club, to continue to develop the club’s image progress on a positive and winning path.”

Klose has scored 48 times in 115 Serie A appearances for Lazio, as well as helping the club win the Coppa Italia in 2013, defeating city rivals Roma in the final.

He previously enjoyed spells in the Bundesliga with Kaiserslautern, Werder Bremen and Bayern Munich.

His career with the German national team saw him become the country’s leading all-time goalscorer with 71, while he is also the leading all-time scorer at the World Cup finals, taking his tally to 16 last summer as Germany lifted the trophy in Brazil.