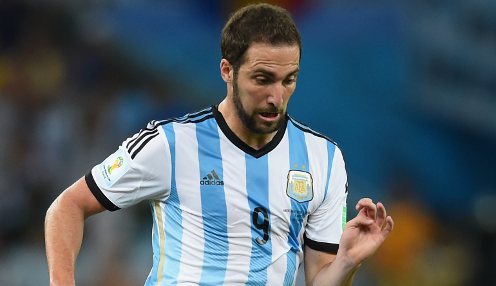 Napoli have warned potential suitors that they will have to pay a £66million release clause to lure Argentinian striker Gonzalo Higuain away from the San Paolo.

The 27-year-old South American frontman has netted 35 goals in 69 league appearances for the Azzurri since his arrival in the summer of 2013 from Real Madrid, leading to Higuain being heavily linked with a number of clubs in England.

There have been no bids.

However, Napoli are in no mood to sell, as they aim to build on a season which saw them reach the semi-finals of both the Europa League and the Coppa Italia, as well as finishing in fifth place in Serie A.

A statement from the Naples outfit read: “Napoli are keen to clarify certain articles, published in some newspapers, about the departure of Higuain.

“The official clarification from Napoli is the following: there is a clause in Gonzalo Higuain’s contract. The clause is £66million.

“There have been no bids. Anyone who wants the player will have to pay the club that amount.”

Arsenal, Manchester United and Liverpool have all been linked with Higuain in the past, with the talented forward currently away on international duty at the Copa America, where Argentina are preparing to take on Colombia in the quarter-finals.

Higuain netted the only goal of the game as Argentina beat Jamaica in the group stage to secure their passage through to the knockout stages in Chile.