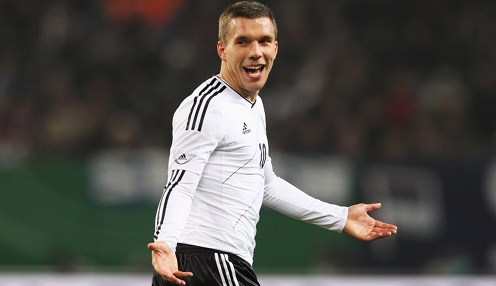 Germany forward Lukas Podolski could return to Arsenal at the end of the season or join a club in Turkey, his agent has revealed.

The former Cologne favourite ended a frustrating spell in north London in January when he agreed to join Roberto Mancini’s Inter Milan in Serie A on a six-month loan deal, but he has yet to find the net for the Milanese giants.

“With regard to his future, all I can say is that anything could happen, even a transfer to Turkey. Why not?”

He scored 31 goals in 82 appearances for the Premier League top-four chasers but this season he only made two starts and 11 substitute appearances, scoring three times, and made no secret of his frustration.

Last summer he almost joined Galatasaray in Turkey but the move fell through and now the player’s agent has reignited the chance of a return to Emirates Stadium.

“Last summer he could have moved to Galatasaray, but it never materialised. Every summer Lukas and I go on holiday to Turkey.

“For the moment he’s on loan at Inter, and when it ends at the end of the season he could return to Arsenal, where he still has a year on his contract.”

Pektas said the World Cup winner was still open to the idea of moving to Turkey in the future and suggested a return to Arsenal is not guaranteed.

He added: “With regard to his future, all I can say is that anything could happen, even a transfer to Turkey. Why not?

“He appreciates it [Turkish football] a lot, and he wants to keep playing at a high level.”

Inter Milan travel to Stadio San Paolo on Sunday to take on Napoli and are currently priced 51.00 to secure a top-three finish in Italy’s Serie A at the end of the season.