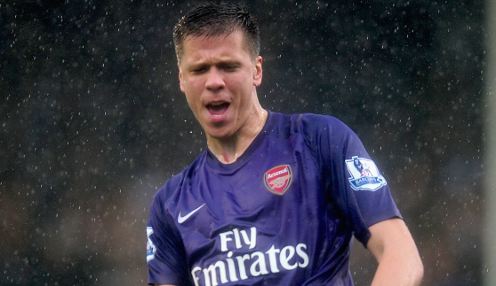 Arsenal goalkeeper Wojciech Szczesny’s move to join Roma in Italy’s Serie A on a season-long loan is “pretty much done”, according to manager Arsene Wenger.

The emergence of Colombia goalkeeper David Ospina at the back end of last season saw Poland international shoved down the pecking order at Emirates Stadium.

“I believe he will have a future at Arsenal. I personally rate him highly – you do not take a boy and put him in the first team at the age of 20 [if you don’t].”

Wenger’s close-season capture of Petr Cech from Premier League champions Chelsea is likely to further restrict Szczesny in his hopes of establishing himself as the club’s number one.

Wenger, speaking ahead of the visit of Ligue 1 side Lyon in the Emirates Cup on Saturday, revealed the 25-year-old is close to completing a temporary move to join the Italian capital side.

“He could go on loan to Roma. We are pretty much done, it is down to paper work but as long as that is not over the line anything can happen,” the Frenchman told reporters at a press conference, ahead of the Emirates Cup.

“Szczesny is a top-class goalkeeper and we have three goalkeepers and if he can play somewhere that is good.”

Wenger also said reports a move to Serie A could spell a permanent end for Szczesny in north London were incorrect.

He added: “I believe he will have a future at Arsenal. I personally rate him highly – you do not take a boy and put him in the first team at the age of 20 [if you don’t]. He already has huge experience. I don’t want that experience at such a young age to be wasted.”

The 65-year-old denied suggestions he made the move for Cech because of long-term doubts about both Ospina and Szczesny.

He said: “I believe that there are two aspects in a decision. Does it give you a chance to make the squad better or is it against some of the performances of your players? In this case I was just questioning if it makes us stronger as a unit, and it has a chance to do that. It was not against Ospina or Szczesny.”

Roma are currently priced 8.00 in next season’s Serie A outright winner betting market and quoted 2.00 to secure a top-three finish.