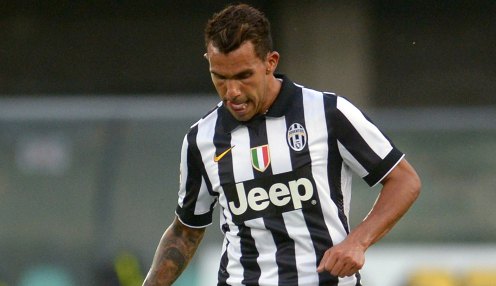 Carlos Tevez is likely to to leave Champions League finalists Juventus this summer.

The 31-year-old Argentina international striker, who moved to the Turin giants from Manchester City in a £10million transfer two years ago, has been heavily linked with a move to Spanish outfit Atletico Madrid and a return to former club Boca Juniors in his homeland.

The possibility that he leaves is quite high but I’m not going to give a percentage.

Despite having a year left on his contract at the Juventus Stadium, Marotta appears open to the prospect of Tevez departing for pastures new in the transfer window.

On Tevez, who was Juve’s top scorer with 20 goals as they won Serie A, Coppa Italia and reached their first Champions League final since 2003, Marotta told Sport Mediaset: “The possibility that he leaves is quite high but I’m not going to give a percentage.

“It’s more likely that he will leave than (Juventus veteran midfielder Andrea) Pirlo.

“Tevez is a professional and we owe him a lot. But we cannot prolong Tevez’s situation for much longer.

“We must reach a conclusion as soon as possible.”

Moratta hinted that Tevez’s likely destination will be Atletico Madrid after their coach and the player’s fellow compatriot Diego Simeone recently suggested that he would be ideal for his squad at the Vicente Calderon stadium.

“We have an excellent relationship with Atletico but we haven’t spoken to them yet,” Marotta added. “Perhaps we will further head (that way), depending on what Tevez decides.”

Juve can be backed at 17.00 to go one better than this term and lift the Champions League trophy, while Barcelona are 4.50 to retain the trophy.