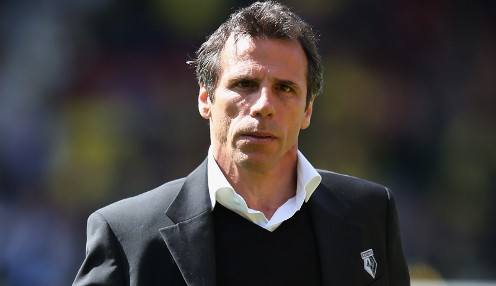 The 48-year-old, who managed West Ham United between 2008 and 2010, before spending 18 months in charge of Watford, is expected to be succeeded by Zdenek Zeman at Cagliari.

Zola was only named manager in December, when he replaced Zeman, but he has failed to revive Cagliari’s fortunes, and they are currently four points away from safety with only 12 games remaining.

He and his staff depart with thanks for the work done in recent months.

“Cagliari Calcio announces that it has dismissed Gianfranco Zola and his staff from the technical guidance of the first team,” the club confirmed on its official website.

“This decision was made reluctantly, in respect of a great man who wrote unforgettable pages in the history of Cagliari, bringing lustre and prestige to Sardinia.

“He and his staff depart with thanks for the work done in recent months, carried out with dedication, professionalism and passion. We wish him heartfelt good luck for the rest of his career.”

Czech coach Zeman is expected to return to the club, as Cagliari are obliged to pay his wages until the end of the season anyway.

Cagliari are 1.44 to be relegated from Serie A this season and can be backed at 2.37 to beat Empoli in their next match on Saturday.