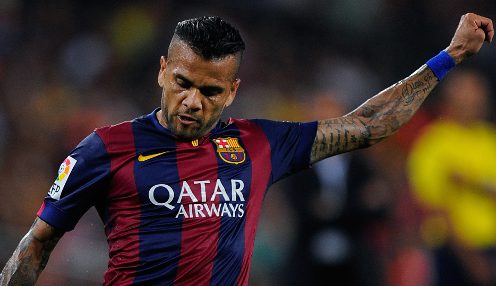 The agent of Barcelona’s Brazilian wing-back Dani Alves says her client is close to signing a pre-contract agreement with another club.

The 31-year-old, who has been strongly linked with Manchester United, is out of contract at the end of the season and looks set to head out of the Camp Nou after seven years with the Catalan giants.

Agent Dinorah Santana told Spanish radio station RAC1: “We are close to signing for another club, talks are advanced. Barca? Dani is still available, but he will not wait much more.”

We are close to signing for another club, talks are advanced.

Meanwhile, Bayern Munich defender Jerome Boateng has claimed to have turned down an offer to join Barca at the start of the current campaign, insisting that he can fulfil his dreams with the German champions.

He told Bild: “I don’t know the details of how much Barcelona offered for me, but it is true that I received an offer.

“When a club like Barca shows an interest, that is of course a huge honour. At the time I was already preparing for the new season with Bayern.

“These days you don’t have to leave Bayern to join Barcelona if you want to win the Champions League.”

Bayern can be backed at 3.75 to win the Champions League for the second time in three seasons, with Barcelona 4.33 and holders Real Madrid 3.75.