Casillas determined to stay at Bernabeu 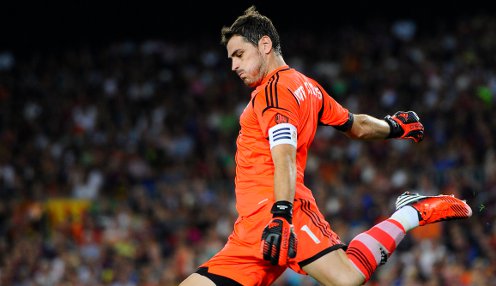 Iker Casillas says he would weclome David de Gea to the Bernabeu.

Iker Casillas says he has no intention of leaving Real Madrid this summer and he would welcome the challenge of David de Gea at the Bernabeu.

Casillas’ relationship with the Madrid fans appeared to deteriorate towards the end of the season, with the veteran goalkeeper receiving plenty stick from the stands.

Most observers felt Casillas would move on from the club this summer but he has now moved to quash any suggestion he will leave.

I would hold off another goalkeeper because I am competitive.

“I’ll be in this goal next season and I do not imagine leaving Real Madrid,” he said.

“I would hold off another goalkeeper because I am competitive. But there will never be a problem between myself and Real Madrid.”

Manchester United’s Spanish international de Gea has been heavily linked with a summer move to the Bernabeu and according to Casillas; he would welcome the arrival of his international teammate.

“People are talking about David and others, if finally he comes he will be well received, we will help him, we will help each other in what we’re lacking and we will have to compete like we compete in the national team,” said Casillas.

Real Madrid are 2.50 to win the La Liga title next season, with champions Barcelona 1.80.

“Yes, I think (he can handle the pressure). No disrespect to Atletico Madrid, which is obviously a great club, but Manchester United is a bigger club, and I’m sure his time at United will have served as a wonderful experience,” he said.

Casillas has spent his entire career at Real Madrid, making more than 500 appearances for the club, but it remains to be seen whether Carlo Ancelotti’s successor will keep faith with the 34-year-old.