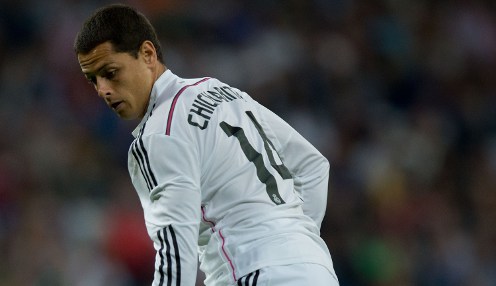 The Mexico international scored twice in a 4-2 win away to Celta Vigo on Sunday to take his tally to four in as many appearances in all competitions. It followed his crucial winner against Atletico Madrid in the Champions League semi-finals.

“Playing at the level he is right now, Chicharito’s place in the team isn’t negotiable.”

The capital giants are now just two points behind leaders Barcelona in La Liga and Ancelotti said Hernandez merited his place in the team.

“Chicharito is enjoying himself and keeping his momentum. He’s being really helpful for the team,” Ancelotti said.

“As for the rest, I thought they did great – it is true we struggled at certain moments but it’s also true that we were really efficient attacking.

“Playing at the level he is right now, Chicharito’s place in the team isn’t negotiable.”

“As I said I count on a team that isn’t negotiable.

“Only 11 players can play at the same time and the rest sit on the bench.”

Real Madrid are hoping to become the first club to successfully defend the Champions League trophy, but must first take on Juventus over two legs, and have just five games left to try reel in Barcelona.

On the title race, Ancelotti added: “For the time being we don’t think about what other teams do. We are only focused on our duties.

“We are doing well after the defeat against Barcelona. We try to be in contention for the title until the very end. That’s our objective.”

Real Madrid are quoted 3.50 to win La Liga and priced 3.00 to win this season’s Champions League.