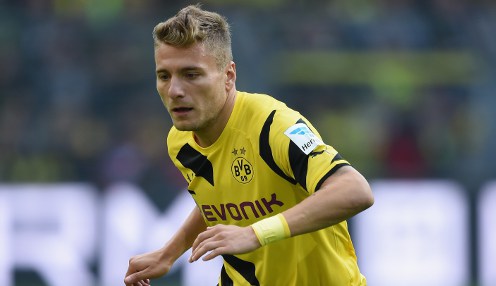 Sevilla loan signing Ciro Immobile has challenged himself to try and emulate the success that Carlos Bacca enjoyed at the Sanchez Pizjuan.

The 25-year-old Italy international frontman scored just three times in the Bundesliga last season following his arrival from Serie A outfit Torino, but is hoping to get his career back on track in Spain.

I’ll try to score as many goals as I can.

However, he is aware that he faces a big challenge to fill the gap left by Colombia star Carlos Bacca, who netted nearly 50 goals in two seasons with Sevilla before heading to AC Milan this summer.

Immobile told Marca: “I think I’ll adapt. Carlos Bacca and I have similar characteristics. We are not the same, but similar.

“I hope to score as many goals as him. I always look for the back of the net, work for the team and I’m quick. Those are my qualities.

“When a player has scored so many goals for a team, he’s difficult to replace, but he’s left for Milan after two good years here and we are the ones who are at Sevilla to play and win games.

Immobile rose to prominence during his one season with Torino, in which he scored 22 goals in 33 Serie A appearances, earning himself a place in the Italy squad for the 2014 World Cup finals as a result.

Meanwhile, Sevilla, who won the Europa League last season, can be backed at 67.00 to win the Champions League next season, with holders Barcelona 4.00 and Real Madrid 6.50.