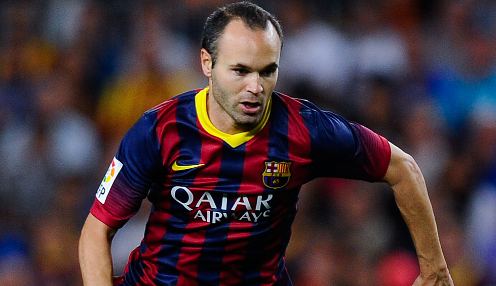 La Liga table-toppers Barcelona will approach the last five games of the season as a “final”, according to veteran midfielder Andres Iniesta.

The Catalan capital giants have a two-point lead over nearest-challengers and bitter rivals Real Madrid at the top in Spain and welcome Getafe to Camp Nou on Tuesday.

“Every match is a final and we really need to win every match left. We’re taking everything seriously and must keep picking up wins.”

Luis Enrique’s men edged a tense 2-0 win against city rivals Espanyol on Saturday and remain on course for the Treble.

They travel to Estadio Nuevo Arcangel next Saturday to take on rock-bottom Cordoba before turning their attentions to a mouth-watering Champions League semi-final first-leg clash against Bayern Munich. They also face Athletic Club in the final of the Copa del Rey on 30th May.

Spain favourite Iniesta said the players were excited by the challenge of winning a clean sweep of silverware but the immediate focus was taking maximum points on Tuesday.

“It’s both great and difficult at the same time [fighting on three fronts],” he said. “We’re happy and content.

“Every match is a final and we really need to win every match left. We’re taking everything seriously and must keep picking up wins.”

Belgium defender Thomas Vermaelen has been given the all clear by the club’s medical staff to make his first appearance since moving from Arsenal last August.

The 29-year-old forgotten man has finally shaken off the hamstring injury which has deprived him of a debut so far for Barca but could be brought into the match-day squad for the remaining games of the season.

Barcelona are currently priced 3.00 to win this season’s Champions League and Bayern Munich are quoted 3.50.