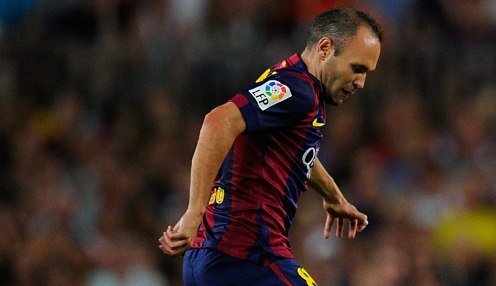 Andres Iniesta has played down Barcelona’s dropped points at Sevilla.

Andres Iniesta has urged Barcelona to “keep improving” and not “blow things out of proportion” after being held to a 2-2 La Liga draw at Sevilla.

The 30-year-old Spain international midfielder was left disappointed on Saturday night as the Catalan giants threw away a two-goal lead at Ramon Sanchez Pizjuan and had to settle for a point.

We have to analyse what we did wrong and keep improving. We don’t need to blow things out of proportion because of this draw.

Luis Enrique’s side were on course for a 10th successive win in all competitions thanks to impressive strikes from Lionel Messi and Neymar in the opening half hour.

But Sevilla got back into the game seven minutes before half time when a mistake from Chilean goalkeeper Claudio Bravo resulted in Ever Banega scoring.

And it was 2-2 in the 84th minute when Gerard Pique’s error gifted the ball to Jose Antonio Reyes and he set up Kevin Gameiro to finish.

Iniesta said: “The point is what it is, we are still leaders and there is a week less to go.

“We have to analyse what we did wrong and keep improving. We don’t need to blow things out of proportion because of this draw.

“It is a difficult place to come and we played well for a large part of the game, but they took their chances.”

Barca will look to return to winning ways on Tuesday when they travel to face Paris Saint-Germain the first leg of their Champions League quarter-final.

Iniesta added: “We always need to be positive and have the confidence that everything will be fine.

“We can’t have any doubts in ourselves.”