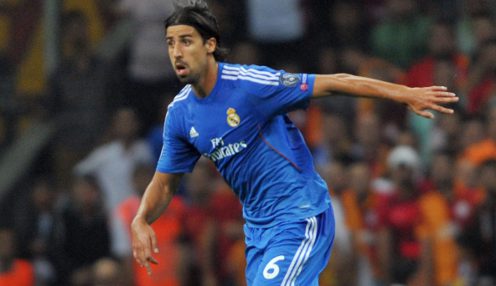 Outgoing midfielder Sami Khedira has aimed a thinly-veiled parting shot at Real Madrid by suggesting he was “frozen out” of Carlo Ancelotti’s side.

The 28-year-old Germany international revealed he was troubled by injury during his last season for the Spanish capital giants but was fit to play and effectively overlooked.

“I’ve always felt that I’ve had the coach’s backing, but the message indirectly came through to me that I was no longer needed, I was frozen out and wouldn’t have a chance to continue playing.”

The World Cup winner said he felt he deserved better treatment at the end of a trophy-laden five-year spell which included winning La Liga, the Champions League, the Uefa Super Cup and the Fifa Club World Cup, as well as the Copa del Rey twice.

He told Marca: “You always have to tell the truth. I did have a small injury, a pain in my right heel, but that wasn’t why I wasn’t playing. It wasn’t a complicated injury, I was able to play.

“I’ve always felt that I’ve had the coach’s backing, but the message indirectly came through to me that I was no longer needed, I was frozen out and wouldn’t have a chance to continue playing.”

He added: “Nobody from the club said anything to me directly. It’s all feelings, incidents and comments saying I wouldn’t play anymore. But nobody approached me.

“There were many meetings. The last one was in October. After many conversations, I wasn’t sure about extending my contract by four years. I had doubts and in December I decided that it was better to go down another path and take on new challenges.”

The former Stuttgart star has attracted interested from Premier League rivals Arsenal and Manchester United, as well as Bundesliga clubs Bayern Munich and Schalke in his homeland.

Khedira said he was sad to be parting under a cloud and was stung by claims suggesting he had shown a lack of professionalism.

“What has happened this season has hurt me to the bottom of my soul. It’s not the end that I wanted,” he added.

“It hurts that I’m accused of a lack of professionalism because I’ve always put the team ahead of myself. I’ve always gone with the truth.

“I’ve felt happy at Real Madrid. I leave with the respect of everybody who’s worked alongside me and with a clear conscience. It’s normal for the press and supporters to criticise me on occasions. That’s football.”

Khedira’s Germany are available to back at 4.00 in the Euro 2016 outright competition winner betting.