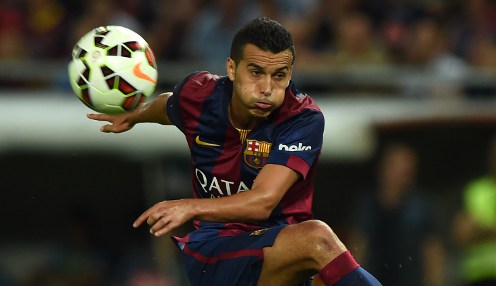 Barcelona’s Spain international striker Pedro has given a strong hint that he may be forced to leave the Camp Nou this summer in pursuit of a regular starting spot.

The 27-year-old has been linked with interest from a number of clubs in England and the Tenerife native is mulling over whether to move on after more than a decade with Barca.

Over the next few days we will speak and look to see what the best option is.

He told El Mundo Deportivo: “It’s true there are offers and it’s a difficult situation for me at Barcelona.

“You want to have minutes, but there are less opportunities every year and each time it’s more difficult. I would have liked to have retired here, we will see what happens.

“Over the next few days we will speak and look to see what the best option is.

“I have won many titles and that fills me with pride and satisfaction, but you always have the ambition to continue to improve and play.”

Pedro, who has won more than 50 caps for his country, netted 11 times for the Catalans last season, with his haul including a hat-trick in the 8-1 Copa del Rey victory over Huesca.

They can be backed at 1.72 to retain their Spanish league title next season, with Real Madrid 2.62 and Atletico Madrid 15.00.