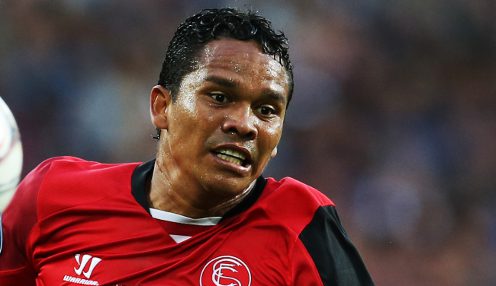 Sevilla say they have yet to field any bids for star striker Carlos Bacca, but cannot rule out the Colombian being lured away from the Sanchez Pizjuan this summer.

The 28-year-old, who is currently away on international duty at the Copa America, where his side are getting ready to take on Argentina in the quarter-finals, has been strongly linked with interest from a number of English clubs.

I hope no-one pays his buy-out clause. It’s a risk we take, but we can’t do anything about that.

And, while Sevilla do not want to lose one of their main players, sporting director Monchi admitted that they face a nervous wit to see if any potential suitor meets the forward’s 35 million euro release clause.

He told the club’s official website: “We have not received an official offer for Bacca. We are not in negotiations for any important player.

“I’m no fortune-teller but top strikers in the market there aren’t that many. Bacca has averaged 24.5 goals, 21 goals in his first season at the club and 28 in his second.

“I hope no-one pays his buy-out clause. It’s a risk we take, but we can’t do anything about that.

“We gave him a new contract ten months ago and I believe he and his family are very happy here, but I cannot predict the future.”

Bacca was a bargain buy by Sevilla two years ago from Belgian side Club Brugge, with the South American having netted 34 goals in 72 appearances in La Liga during his time in Spain.

He also scored twice in the Europa League final last season, as the men from Seville defeated Dnipro Dnipropetrovsk 3-2 to earn a place in the Champions League.