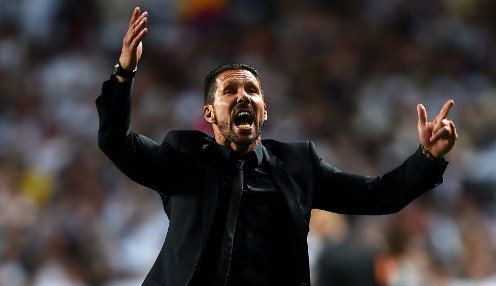 Diego Simeone is worried it will be some time before Atletico Madrid can challenge Barcelona and Real Madrid for the La Liga title again.

Luis Enrique’s Barca were crowned champions of Spain thanks to a 1-0 at Vicente Calderon on Sunday. It was sweet revenge for losing out to Simeone’s Rojiblancos on the final day of last season at Camp Nou.

“We will try to compete with the weapons we have. But looking at it realistically, we are still involved in an internal tournament of our own with Sevilla and Valencia.”

El Atleti won their first championship since 1996 just 12 months ago but will now have to see off the challenge of Valencia for the remaining automatic Champions League place in next Saturday’s finale.

“Before all else I’d like to congratulate the champions. They are deserved winners,” Simeone said in quotes reported by AS.

“It must be nice for them to reclaim the trophy after having missed out last season. We lost because of moment of genius from [Lionel] Messi.

Sunday’s win meant Barcelona completed a La Liga double over the capital club but Atletico Madrid did secure the derby spoils over their illustrious city neighbours Real Madrid home and away this season.

Simeone suggested his club could not match the two Spanish giants season-on-season but demanded one last push next Saturday.

He added: “In 50 years, we’ve won two leagues. We have a lot of work to do. We are fighting to finish third; it’s very complicated to end as league champions.

“We will try to compete with the weapons we have. But looking at it realistically, we are still involved in an internal tournament of our own with Sevilla and Valencia.”

Atletico Madrid travel to take on Granada on Saturday and are currently priced 2.10 in the match betting. The draw outcome is quoted 3.10 and the home side are available to back at 3.75.