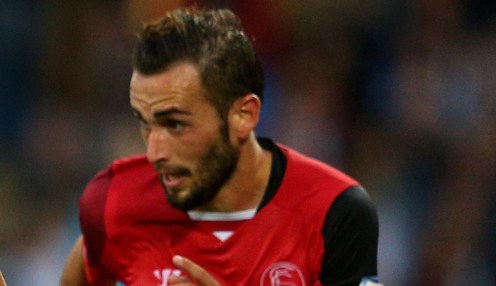 Barcelona new recruit Aleix Vidal is excited about his switch from Sevilla, even if he has to wait to make his debut for the Spanish and European champions.

The 25-year-old wing-back has agreed a move to the Camp Nou, but will be unable to feature for his new club until January next year due to a transfer embargo.

The time out is going to be useful for me to improve specific elements of playing in a position that’s still relatively new to me.

However, Vidal is not too concerned by that situation, saying he will use the months ahead to bed in at Barca and get ready for a potentially more defensive role than the one he has been used in by Sevilla.

He told reporters: “When I realised it was going to happen, I didn’t think it would be a problem being out until January. Positives come with that – I can concentrate on getting ready for where I’m going to play.

“The time out is going to be useful for me to improve specific elements of playing in a position that’s still relatively new to me.”

Meanwhile, Barca president Jose Maria Bartomeu has played down suggestions that head coach Luis Enrique could leave the club, despite guiding them to a superb treble.

Bartomeu, who faces a re-election battle this summer, told Catalunya Radio: “I have no doubt regarding Luis Enrique’s continuity. He is under contract and has done a magnificent job.

“I don’t see any impediments for him to continue in a team who have started a winning cycle. I see him as being very enthusiastic.

“If I am re-elected as president, one of the first things I will do is offer Luis Enrique a contract extension.”